A Cold Winter Trash The Wedding Dress With Fire In Atlanta 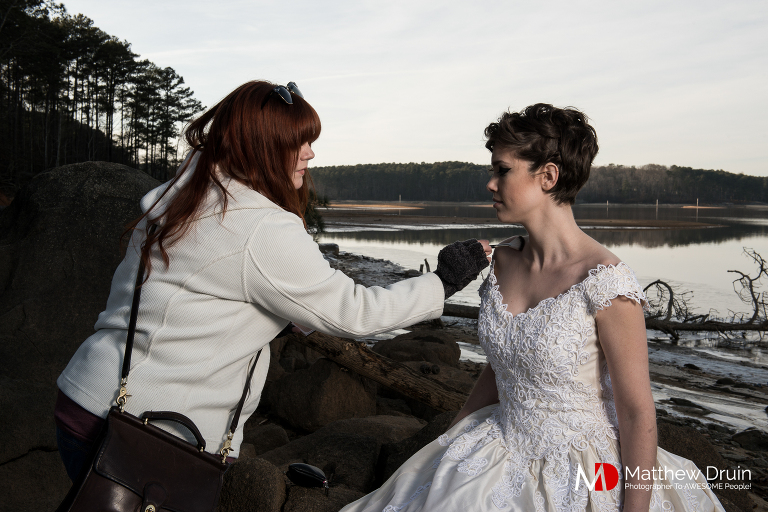 I have driven by this lake for a couple of years now and noticed at the beginning of each winter, it was drained. I did a little research and found out that it’s drained each year to be cleaned. I’ve always wanted to shoot something in the lake while it was drained but never had the chance until now. 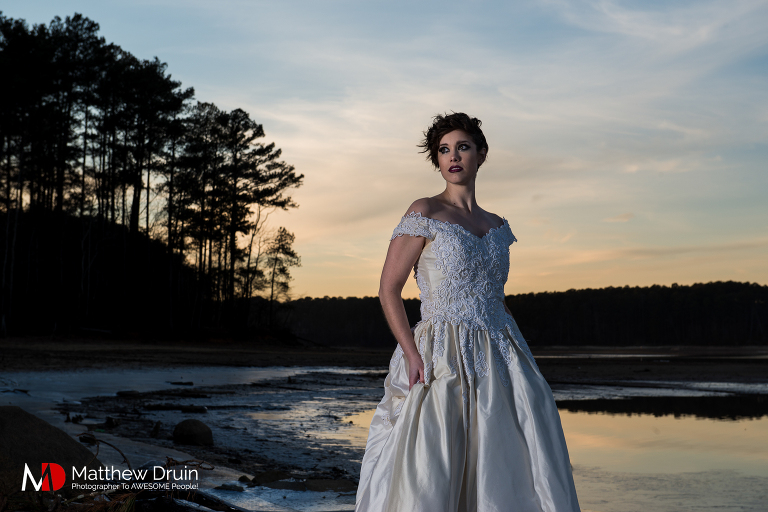 We planned the shoot for January and hoped the weather would hold out. Luckily for us it was a perfect day! Very cold, but perfect other than that. Once we arrived at the location, everyone started getting prepared. Melissa and Jon got into their wedding attire and Layne Lasseter started prepping the makeup.

If you remember Melissa and Jon’s Atlanta wedding, the wedding attire they wore for the trash the dress was not actually from their wedding. Instead, Melissa’s dad is a photographer and he just so happened to have a nice selection of dresses from a number of years ago. 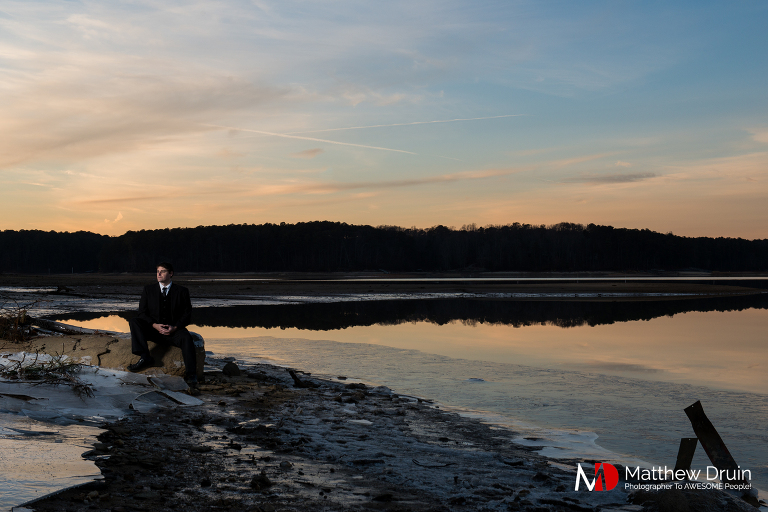 Dan and I made our way out into the lake to start preparing the fire. We brought a fire extinguisher for safety, lighter fluid, and some giant lighters. We tested the lighter fluid and was very disappointed in the results. The mud and dampness sucked the fluid right up and wouldn’t catch on fire. We tried everything with the exception of lighting the actual bottle on fire and still nothing!

After a little discussion, we opted for plan two. We sent Jon out to get a couple gallons of gas. Everything burns better with gas! Meanwhile, the rest of us started piling up sticks, logs, pine straw, and just about anything else to create a nice barrier to light. There was a number of random fishing lures and other dangerous objects lurking under some of the brush so that made the process a little slower. 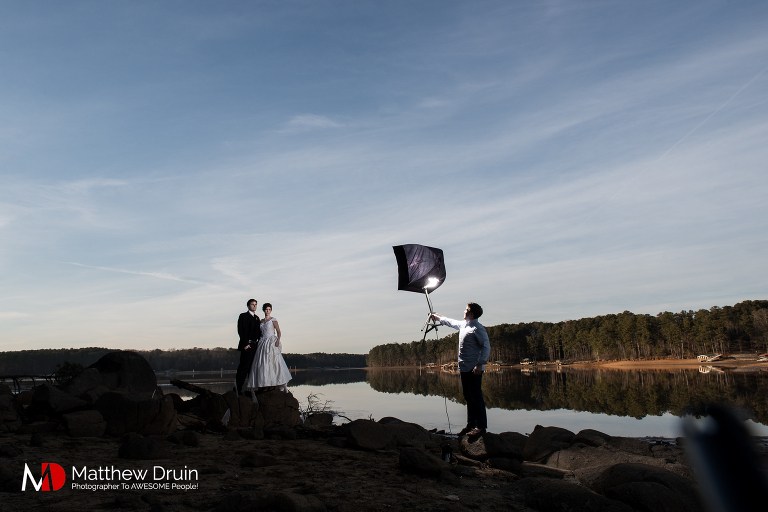 Once everything was in place and Jon arrived with the gas we started doing test shots. Since we would have limited time to photograph what we needed once the fire started, I wanted to ensure everything was working correctly and ready to go. The test shots went great and we were ready to light it up!

Starting a fire is much harder than I anticipated even with gas. If I were an arsonist, I would be horrible at it. We doused the areas with gas and moved everything out of the area for safety and put Melissa and Jon into position. For their safety, we made sure the barrier was back far enough so they wouldn’t get caught up in the fire and created a way out of the area in case something did go bad. 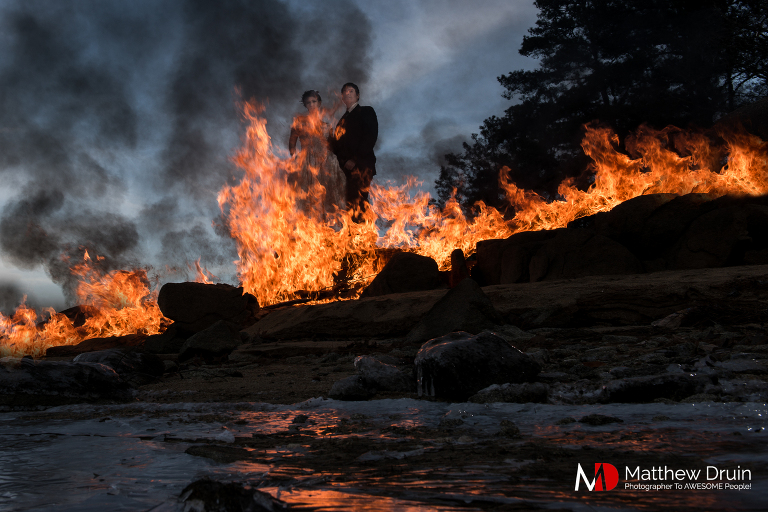 With little trial and error (ok, a lot), we finally got the fire roaring and got a few shots of the wedding dress with fire in before it would die out. Shooting with fire was far more challenging than I thought. Since I was dealing with nature, pretty much everything was unpredictable with the exception of my camera and lighting settings.

The fire would die out pretty quickly, so we had to try it a number of times. Each time, we would ensure it was completely out so we didn’t pour gas on any flames, then start over again. We did this a number of times before we got a really good fire going and captured the photos that we needed. Dan and the lighting gear was almost taken out by the last fire attempt, but it all worked out and no one was hurt. 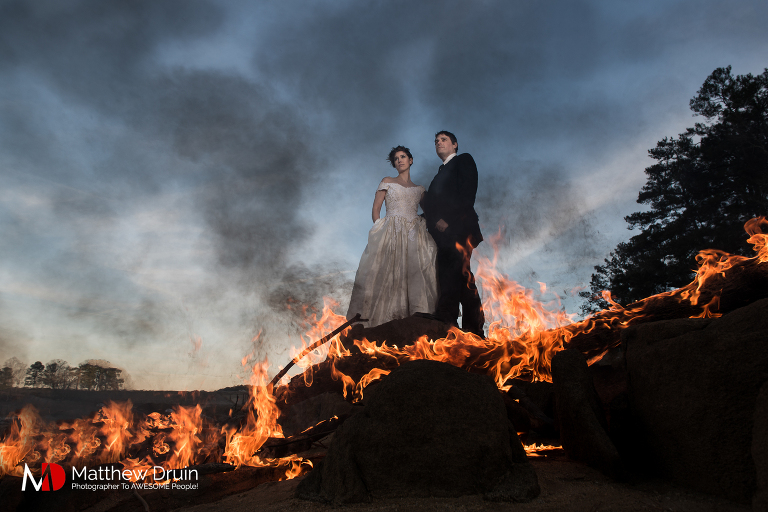 Once we got the main photos out of the way, we worked on a few individual portraits along the icy edge of the drained lake water. We were running low on gas but had enough to add little flames around. The gas would actually get trapped underneath the ice and burn below the top layers of frozen water. It was pretty interesting to watch the fire burn under the ice.

As the daylight quickly disappeared, we gathered everything up and ensured all the fires were completely out before packing up the cars. I have to give big props to everyone for helping to make this shoot happen, especially Melissa and Jon for having to stand out in the cold with little clothing to keep warm while we were shooting.

Here are a few of my personal favorites from their trash the wedding dress with fire session. 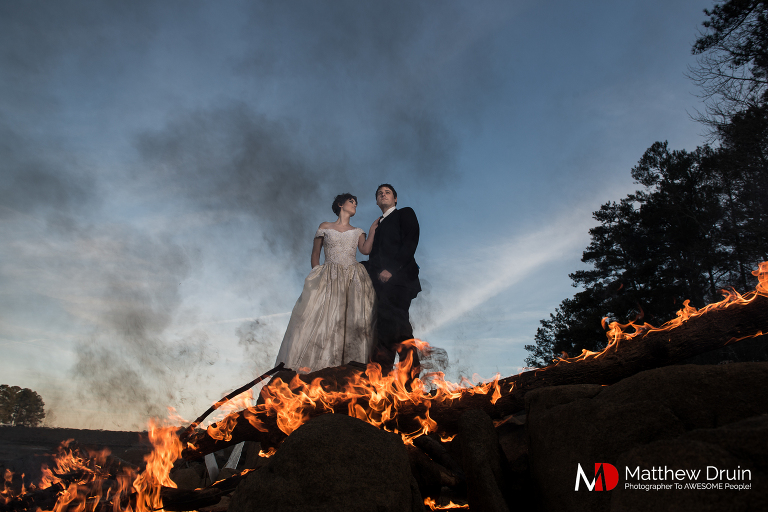 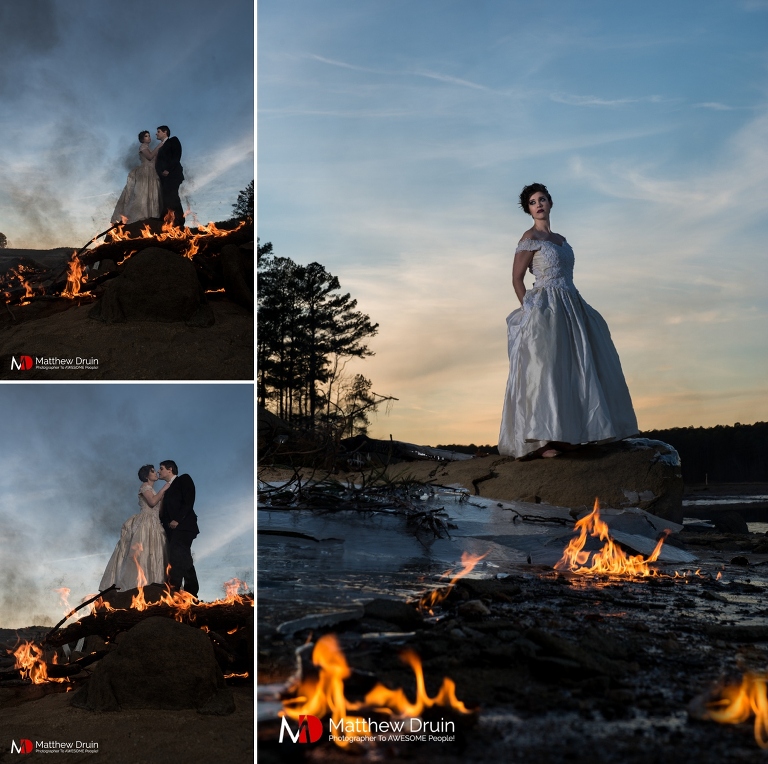 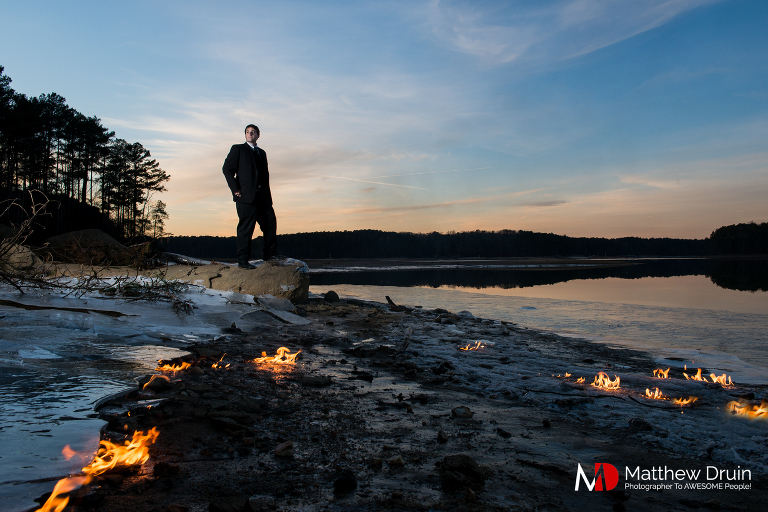 My name is Matt Druin and I’m an Atlanta wedding photographer that specializes in unique, offbeat weddings for all awesome people! Not only do I shoot amazing Atlanta weddings, but I also travel frequently for destination weddings, and weddings all over, with no travel fees in the US for amazing wedding photography. I also shoot Atlanta engagement sessions for newly engaged couples. I’ve even been known to travel, and far, for engagement sessions too!